The life of a stupid man

Ryunosuke Akutagawa is today considered one of the most important writers of the Japanese modern era. Being a prolific writer, he was especially known for his short stories which were deeply influenced by ancient myths and engaged with the problems of city living and the loss of values in the modern world, describing characters who try to escape from all of that. He began writing in 1913, right after entering the Tokyo Imperial University to study English literature. 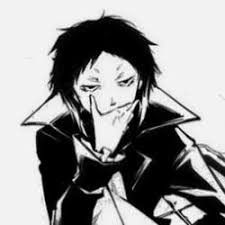 He was a very cultivated man, and by middle school he was already familiar with the work of Western writers such as William Butler Yeats and Anatole France whose works he also translated. In his early years, being 25, Akutagawa produced confessional and self-revealing short-fiction in the Japanese “I” novel tradition of shishosetsu. As his creativity, increased, he began thoroughly examining the position of the individual towards art and life in his symbolic writings. At the time, his writing rooted mostly in histories and legends, issued from various cultures and time periods, which he managed to rewrite integrating modernist psychological terms.
When he was young, his mother suffered from mental illness and lapsed into a schizophrenic state from which she never recovered. Akutagawa was deeply marked by his mother’s insanity; his memories resulted in the fear that he may inherit her mental condition which ended up being an obsession in his life. This factor became a strong influence in his writing and is often theme in his short- stories.
The final phase of his literary career was marked by his deteriorating physical and mental health. Like one of the characters in his books, Akutagawa himself had been trying to escape a world that he found uncomfortable. In the final years of his life he was suffering from insomnia and had multiple mental breakdowns. During this period, most of his work is distinctly autobiographical, much of which are even parts taken directly from his diaries. As the author began expressing more 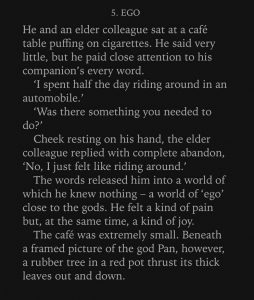 of his own neuroses, delicate physical condition and drug addiction, the tone and atmosphere of his fiction darkened with hints of madness and a will to die.
It was in the last years of his life, when he wrote “The Life of a Stupid Man”, a summation of his life, told in a montage of 51 fragments. These short texts describe short moments that marked his life; books he read, women he loved, his fear of society and his hatred for himself with every line exposing his suicidal tendencies. In this text all the characteristics of his late autobiografic writing can be found; the usage of  a simple, almost cynical language over lyricism, his notion of creation and art.
Section 49, entitled “A Stuffed Swan”, concludes:
Once he had finished writing “The Life of a Stupid Man”, he happened to see a stuffed  swan in a secondhand shop. It stood with its head held high, but its wings were yellowed and moth-eaten. As he thought about his life, he felt both tears and mockery welling up inside him. All that lay before him was madness or suicide. He walked down the darkening street alone, determined now to wait for the destiny that would come to  annihilate him.

This entry was posted in création des romans 2019 rapport 3. Bookmark the permalink.