Koki Tanaka is a Japanese artist that focuses on photography and videography. He was born in 1975 and studied in the Academy of Fine Arts in Vienna and in Tokyo Zokei University, and as well acquired a master’s degree from Tokyo University of the Arts. He also represented Japan at the Venice Biennale in 2013. His early work consisted of everyday objects and situations, with minimalist elements and an alternative point of view. He took great interest in looping videos of everyday phenomena in unusual ways; like having someone repeatedly manipulate an object, his focus being the object rather than the person.

He moved to Los Angeles in 2010, where he began working on different projects. He would ask a group of people to do the same thing at the same time. For example, he paired five pianists to play on the same piano at the same time, or he asked nine hair stylists to give someone a haircut all together. The most interesting one to me is the attempt of five poets writing one poem. In my opinion, the way the subjects in his videos work together to achieve a coherent goal is fascinating and structured. For instance, in his video ‘A Piano Played by Five Pianists at Once (First Attempt)’, five pianists with different styles and educational backgrounds are given one sole instruction; to play the piano all together at the same time. The pianists proceed to talk about their ideas regarding the project, trying out different techniques while working to accomplish the same goal. After the process is completed, the produced work of art is not just specific to its element. More simply put, the piano piece is not just music, it represents a model of collaborative efforts, and extensively, a collective, which is what Tanaka strives to achieve and show through his work. 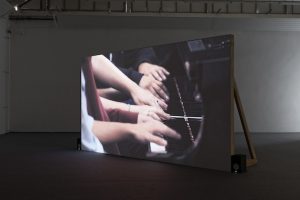 This entry was posted in création des romans 2019 rapport 3, Uncategorized. Bookmark the permalink.