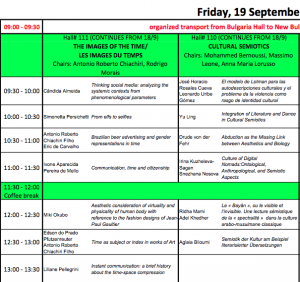 Jean-Paul Gaultier, born in 1952, French Haute Couture and Pret-a-Porter couturier, never received formal training for his profession. His diverse, innovative, provoking fashion, radically explores critical issues like sexuality when putting up against conventional Haut Couture. Unfortunately his works have not been correctly evaluated partly because of an excessively provocative slogan. People lose sight of the most interesting aspects of Gaultier’s expression. What I attempt to revaluate is his designs concerns his manner of representing the human body as a way to radically influence our body consciousness.

In his work, the human body is often both abstracted and concretized. These strong, opposite expressions are present simultaneously. “Abstraction” means human body represented as numerical/digital information while “concretization” means vivid existence in a real, physical sense. Today, the human body seems to be becoming an increasingly informational object. People have very detailed numerical knowledge about the body. In addition, technological developments allow us to construct our body image in a way similar to androids or robots.Virtual images settle progressively in our mind. “Skin Series”, where Gaultier used three identical models, illustrate clearly this observation. Each piece represents muscle, blood vessels and bones. His illustration shows a kind of simplification to figure these organs and everyone will understand what he represents. However, in spite of their closeness, these organs will never be visually familiar to us. Our awareness is drawn to them only during specific occasions like an accident or an injury. Advanced medical knowledge and detailed anatomical knowledge have given us a typical human body image. In short, a reconstructed body through new technologies is very different from a real body, accompanied with smell, perspiration and weight.

Furthermore, Gaultier is one of the first couturier to appoint atypical/untraditional fashion models. Today, the an unusual body seen on the catwalk no longer causes sensation because we have become accustomed to this kind of surprise, seeing various models, large, small and different. However, at the time Gaultier first introduced this idea, it caused a scandal amongst the conservative realm of Haut Couture.

What I attempt to theorize in my presentation is the modern relationship between virtual image and the true, physical human body in order to understand the reality of contemporary fashion concerning body consciousness and physical perception.